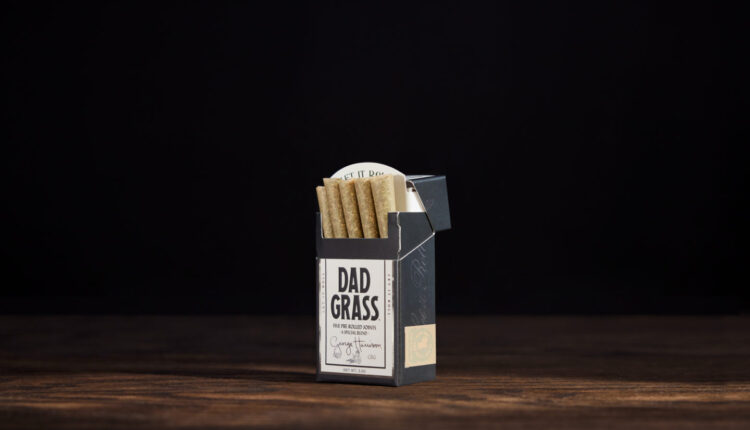 At the 64th annual Grammy Awards ceremony at the MGM Grand Garden Arena in Las Vegas, Nevada on April 3, the George Harrison Estate accepted a Grammy Award for “Best Boxed Or Special Limited Edition Package” after releasing the All Things Must Pass: 50th Anniversary Edition. The album hit number one last August in the Billboard Top Rock Albums chart, over 20 years after Harrison’s departure from the material world.

To celebrate, Dad Grass today announced a special collaboration of hemp-derived CBD + CBG pre-rolls and accessories, working closely with the George Harrison Estate. The scope of his influence in music is difficult to gauge, as Harrison’s extraordinary talent emerged from the best-selling musical act of all time in certified sales.

“George himself was a mystic blend. A blend of cultures, styles, times—you name it,” Dad Grass’ co-founders Ben Starmer and Joshua Katz told High Times. “He was living proof that certain blends, of the right ingredients and in the proper proportions, do it better. So we set out to craft an all new kind of joint. A mix of Dad Grass CBD flower and Mom Grass CBG flower. CBD for physical harmony and CBG for mental clarity. A peaceful balance of our two favorite and most enlightening cannabinoids, all wrapped up to deliver what we call a ‘heart high’.”

Starmer and Katz continued, “It might sound cheesy, but it’s our love song to George and his beautiful dualities. Our tribute to him as a catalyst for creativity and connection. A special blend that we hope is worthy of George’s name and legacy.”

To date, no other estate associated with The Beatles has ventured anywhere in the territory of hemp and/or cannabis. It began as a fleeting joke, but snowballed into a blossoming collaboration.

“Both Dad Grass and the George Harrison Estate like to work with friends who share similar sensibilities, sense of humor, and sense of what the world needs,” Starmer and Katz stated. “What started as a casual ‘wouldn’t it be classic if…’ conversation amongst friends (mostly around the idea of ‘All Things Must Grass!’) quickly became a ‘we have to do something together’ type thing.”

The collection can be purchased online now here and will be available in-store at select retailers across the United States this month. Dad Grass is legal at the federal level thanks to the 2018 Farm Bill—meaning it can be delivered to doorsteps across the country via USPS. Hemp products are regulated much differently, so long as they contain less than 0.3% THC on a dry weight basis.

The lead product out of the All Things Must Grass collection is the Special Blend George Harrison Dad Grass Five Pack, a pack of pre-rolls crafted from a mix of CBD- and CBG-rich hemp flower responsibly grown in the U.S. CBD is believed to promote physical harmony and CBG is believed to promote mental clarity.

Many people—myself included—quit smoking tobacco cigarettes with the help of hemp, as nicotine is the main culprit for impulsive cigarette cravings. Smoking a hemp cigarette fulfills the psychological need to smoke something, but the person isn’t getting any nicotine, which is far different in terms of cravings.

Most people are aware of the enormous impact of cannabis in The Beatles’ music, but the band members also did more than the average cannabis advocate. With an expensive full-page ad to run in the London Times on July 24, 1967, Harrison joined The Beatles, manager Brian Epstein, and a few dozen activists to urge lawmakers—insistently—to legalize pot in the U.K. A near-mythical visit from Bob Dylan is often cited as their first experience, but Harrison wrote in a memoir that they’d been exposed to it by a fellow drummer’s older brother in Liverpool.

The collaboration also features merchandise including George Harrison signature rolling papers, a rolling tray, an ashtray, limited edition silk-screened posters, buttons, pins, matches, stickers and a very special edition All Things Must Grass Dad Stash. This version of Dad Grass’ stashing system disguises a pack of Special Blend joints as an All Things Must Pass double cassette box so you can hide your grass in plain sight. For more information on the components of the entire collection, visit here. All Things Must Pass Anniversary Edition

While The Beatles were still together but beginning to dissolve, Phil Spector produced All Things Must Pass by George Harrison. It was The Beatles’ best-selling solo album, selling more copies than John Lennon’s Imagine and Paul McCartney and Wings’ Band on the Run combined, according to John Bergstrom of PopMatters. It was certified platinum seven times.

On August 6, 2021, the George Harrison estate announced the All Things Must Pass 50th Anniversary Edition, available in a variety of formats. Crafted by the Harrison family, All Things Must Pass was remixed from the original tapes for the 50th anniversary release. Executive produced by his son Dhani Harrison, produced by David Zonshine, and mixed by triple Grammy Award-winning engineer Paul Hicks (The Beatles, The Rolling Stones, John Lennon).

“(…) Bringing greater sonic clarity to this record was always one of my father’s wishes and it was something we were working on together right up until he passed in 2001,” Dhani Harrison said last August. “Now, 20 years later, with the help of new technology and the extensive work of Paul Hicks we have realized this wish and present to you this very special 50th Anniversary release of perhaps his greatest work of art. Every wish will be fulfilled.”

One way you can celebrate the Grammy Award win and continuation of the 50th anniversary is with Dad Grass’ unique collaboration.

The post George Harrison Estate and Dad Grass Celebrate Grammy Win and Over 50 Years of ‘All Things Must Pass’ appeared first on High Times.

A Cannabis Cartel in Canada Inevitable?

What's new in weed: products and news from Ripple, Dad Grass, and more