Home to the Grand Canyon, the first McDonald’s drive-through, and a sincere love of firearms, the Copper State ticks the checklist of things that are truly American. It’s a microcosm of the greater United States. Arizona reflects in a very visible sense the societal tone of America. In one such way that is presented is the legalization of marijuana. Recreationally, it’s illegal, but medicinally, marijuana in Arizona is legal. The future of its legal status is in the hands of the voting public, and recreational might be just around the corner. 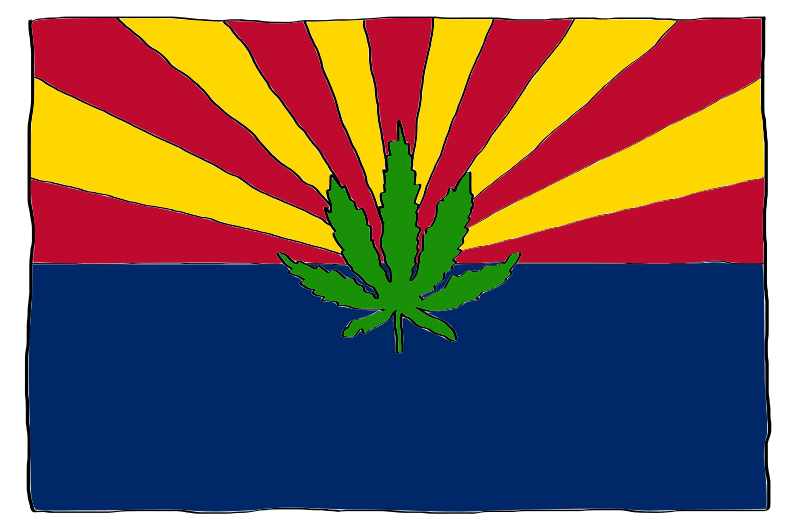 Being caught with any amount up to 2 lbs is a felony with up to 2 years prison attached. Between 2 and 4 lbs could result in up to 2.5 years prison, and possession of more than 4lbs is up to 3.75 years in prison (oddly specific I know). On top of all that, each of these offenses can also result in fines up to $150,000.

On the inverse of the restrictive recreational laws, the legal medicinal marijuana program in Arizona is quite expansive. Signed into law in 2011, Arizona’s medical marijuana program administers the needs of over 230,000 patients. In the state, those with a valid MMJ card can possess a maximum of 2 and ½ ounces within a 14 day period. If they don’t live within 25 miles of a state-licensed dispensary (of which Arizona has many) they may cultivate a home crop. To become a patient on the state medical marijuana program, you need to register and have a doctors diagnosis.

Often times the crux of the legalization debate comes down to the medicinal factor. Yet for a state that has had medical marijuana for almost a decade, the desire to see marijuana recreationally legalized is still strong. In 2015, a news poll carried out by multiple publications found that 50% of respondents supported legalizing marijuana, with 40% against and 10% not knowing where they stood. Since then, a survey ran by Predictive Insights in 2019 found that 54% of Arizona supported legalization.

With over half the population of Arizona favoring the legalization of marijuana, it’s little wonder that attempts at legalization have been numerous. In 2016, there was an attempt to legalize marijuana within Proposition 205, but was ultimately outvoted (just). But in 2020, with everything that’s going on, it’s looking very hopeful.

Will Arizona Legalize In 2020?

While initially there were many competing legalization campaign groups, Smart and Safe won out, with the other groups withdrawing and focusing on supporting them. Their approach to campaign for legalization consists of economic debates centered around public service funding. Arizona voters will likely have the chance to vote on the Smart and Safe Act in November 2020. The initiative needs 237,645 valid signatures to qualify for the November 2020 ballot. The campaign has claimed they expect to have 400,000 signatures by next month.

The amount of signatures doesn’t really matter though, if the voting residents will once again vote it down. But this time, it’s looking very promising. 65% of respondents said they would be in support of legalization. With a margin of error of 4.9%, it’s looking good. Perhaps when the vote is counted and marijuana is legalized, Arizona can take the idea of prohibition and dump it into the Grand Canyon. It’s looking very likely that legal marijuana will be throughout Arizona soon enough.