CBD… What is it? And does it help you relax? 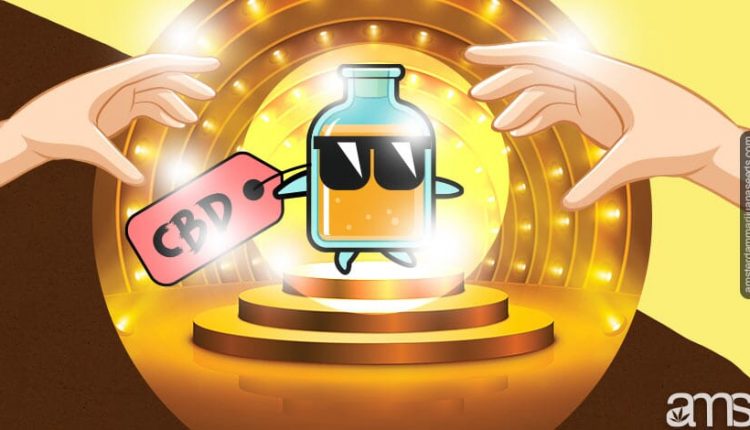 CBD has exploded in popularity in recent years. From obscurity to a starring role in drinks, supplements, and even cosmetics. But what is CBD? Is it safe? Does it get you high or does it bring you down? In this article, we’ll take a look at THC’s upstart cousin and the science behind its supposed relaxation-boosting properties.

Believe it or not, cannabidiol (CBD) was discovered long before THC. First extracted and studied in 1940, CBD was quickly overlooked as the non-active part of cannabis, and then eclipsed by its psychoactive cousin THC when it was discovered a quarter of a century later.

But now, CBD has come out of the shadows and is making waves. 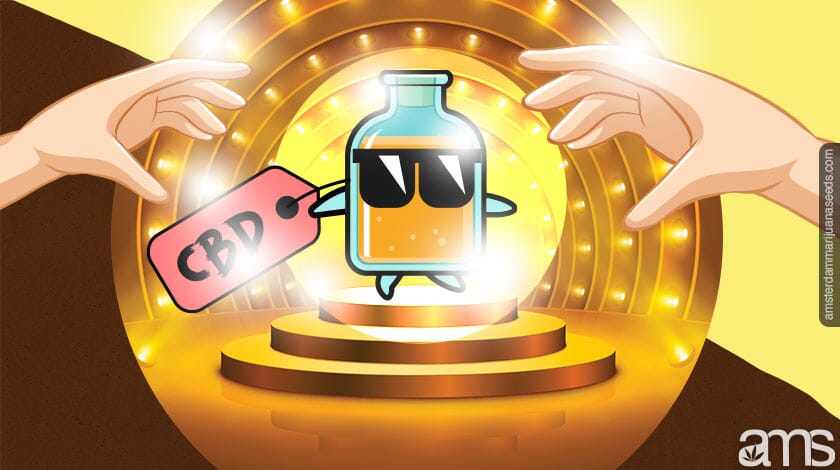 Google searches have skyrocketed in the past few years. CBD has started to appear on shelves as the starring ingredient in supplements, drinks, gummies, and chocolate bars. Even major companies are getting in on the act.

In the US, the CBD industry is projected to be worth $5 billion in sales this year alone, and this figure could more than double by 2027. In Europe, sales are expected to pass the $3 billion mark in 2022.

True of many things, where there’s money, there are also people out to make a quick buck. Some CBD manufacturers have come under criticism for selling products that falsely claim to treat or cure serious diseases. This included selling unapproved animal products for pets. Using your pet guinea pig like a guinea pig, how dare they?!

Unsubstantiated claims – driven by money and not science – don’t just harm the people (and their pets) hoping for a cure or a treatment, they also harm the movement: people like you, who care about cannabis, the culture, and the potential it may have to ease certain types of pain and illness. CBD and other cannabis products can only be strengthened by grounded, high-quality science and evidence-based claims.

So, with that said, on to the main event, let’s take a look at what the research out there says. Is CBD a gimmick? Does it help you relax? Does it do anything? 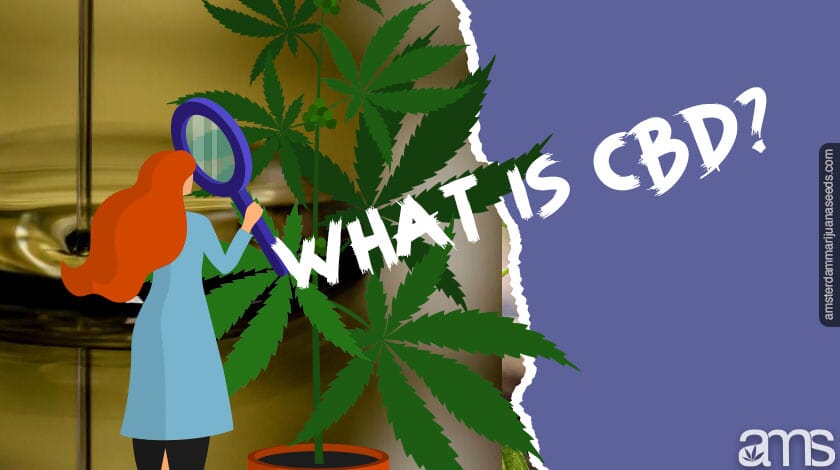 CBD, like THC, is one of the hundreds of phytocannabinoids found in the Cannabis sativa plant.

Unlike THC, CBD is non-intoxicating, meaning it doesn’t produce any change in mood, perception, behavior, or thoughts.

According to the World Health Organization, ‘cannabidiol does not appear to have abuse potential or cause harm.’

These same qualities that led CBD to be overlooked have now made it more suitable for research, medical applications, and mainstream consumer products than the other psychoactive cannabinoids.

When ingested or smoked, CBD enters the bloodstream, where it acts on the endocannabinoid system (ECS). The ECS is a specialized network of neurons and chemical transmitters that regulate functions such as mood, memory, and even inflammation. The exact mechanism of CBD is yet to be understood, but in isolated studies, has been shown to have anxiety-reducing, anti-inflammatory, and anti-psychotic effects, and can help with symptoms of nausea and vomiting.

CBD is no gimmick. It has proven successful in treating certain types of childhood epilepsy that are resistant to typical medications. In 2019, the European Medicines Agency approved Epidiolex, a CBD-based drug, for patients aged 2 years and older.

This has driven others to examine its potential for use in other conditions related to neurological dysfunction, such as insomnia, anxiety, post-traumatic stress disorder (PTSD), and chronic pain.

Does CBD help you to relax?

Can the effects of CBD on our endocannabinoid system help with relaxation? Research suggests that CBD can be helpful in several conditions associated with anxiety, or an impaired ability to relax. Other lab-based studies have shown promising results for using CBD to relieve pain and even inflammation associated with acne. 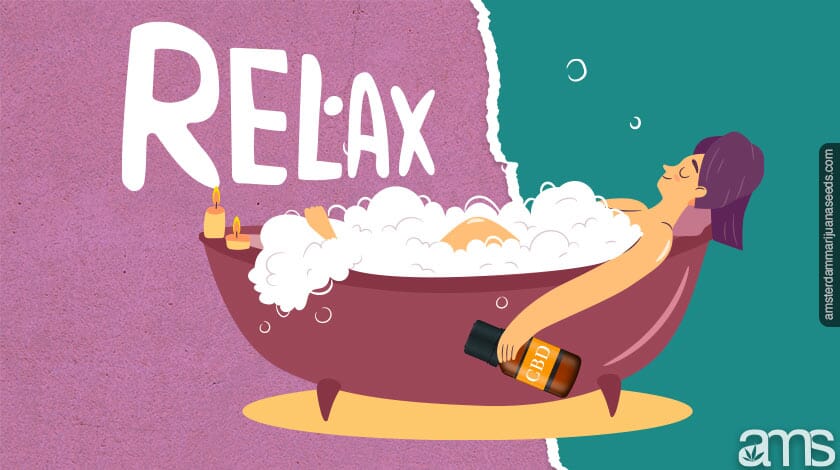 Anxiety is one of the most common mental health issues worldwide. Characterized by disabling feelings of dread and impending doom, anxiety affects many aspects of life, including the ability to feel calm and relaxed. Many of the approved drugs for anxiety are only effective in around half of the patients and are associated with side effects.

Could CBD be a good alternative? Well, preliminary research has found that CBD may be helpful for the relief of symptoms associated with anxiety. Animal research supports the use of CBD as a treatment for a range of anxiety-related conditions. Small studies involving human subjects have shown that CBD helps with experimentally induced anxiety (a simulated public speaking test or job interview) and Social Anxiety.

At the moment, the available evidence points towards the calming effect of CBD on the central nervous system. What is important to note is that in these tests, doses of CBD of around 400-600mg were used, whereas an average CBD beverage has only 10-20mg.

Sleep is an essential component of physical and psychological well-being. Poor sleep has been linked with diabetes, heart disease, and depression. In fact, in our modern, fast-paced world of on-demand technology, and a fast-disappearing work-life divide, some health organizations have gone so far as to call it a public health epidemic.

Poor sleep can be caused by psychological and psychiatric issues, physical problems such as pain, medications, caffeine, and external factors such as a poor sleep environment. Most of the time, poor sleep is a symptom, rather than the condition itself. While that doesn’t make it any less distressing for those struggling to catch much-needed Z’s, it does make treating it more complex than it initially appears.

At the moment, only a small amount of human research on the effects of CBD on human sleep has been completed, though the early signs are promising. In one small study of 70 patients with anxiety and sleep complaints, 2/3rds found some improvement in their sleep within the first month of taking CBD. While the numbers are small, the initial data is encouraging. A larger study called the CAN SLEEP trial is underway and will give us more insight into the effects of CBD and THC on people with chronic insomnia.

REM sleep behavior disorder, a condition where people make aggressive movements during the Rapid Eye Movement phase of sleep, could also be helped by CBD, while other research has even examined the potential for CBD to induce wakefulness. 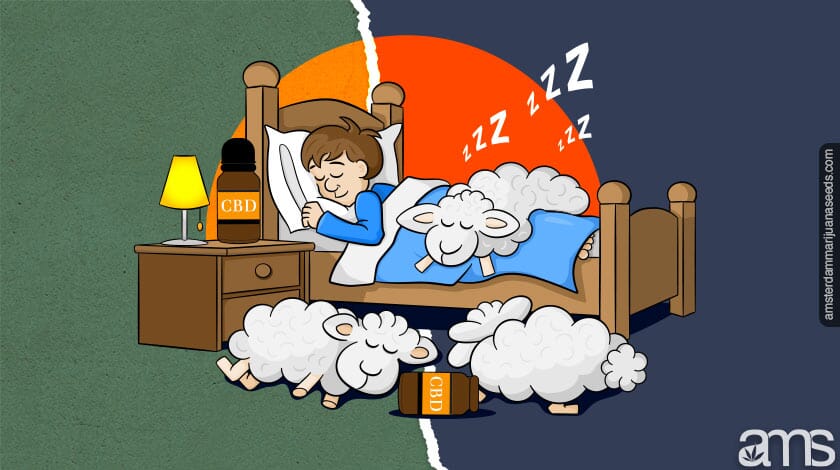 Post-traumatic stress disorder will affect around 6% of us at some point in our lives. The symptoms of PTSD include intrusive memories and nightmares known popularly as ‘flashbacks’, changes in mood, and a heightened state of arousal, which can manifest as anxiety, poor sleep, and a feeling of being on edge. Currently, available drugs for PTSD on the market are poorly effective and have significant side effects.

Lab-based research into CBD and PTSD has shown some promising findings but this is yet to be transferred over into large-scale clinical trials with human subjects. What is out there has been described as minimal and controversial. In small studies and isolated cases, CBD reduced the response to negative memories, improved cognitive performance, improved sleep, and reduced anxiety in PTSD patients. As with the other conditions, more evidence is needed to confirm these findings before it can be recommended as an official treatment. 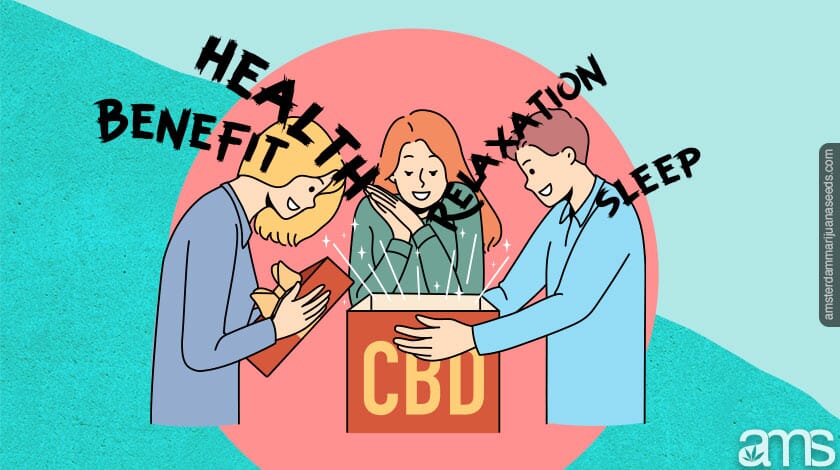 Generally, CBD is safe and has few adverse effects, but like all medicines, it’s vital to consult with your physician before taking CBD, especially if you have pre-existing medical conditions, or are taking any medicines

As we’ve talked about in this article, CBD can have a sedating, relaxing effect, and for many people reading this article, that’s kind of the point! But, if you’re using it alongside other sedating medications such as benzodiazepines and opioids, this can cause respiratory depression, where your breathing rate drops to dangerously low levels.

CBD has been noted to cause liver dysfunction, especially at higher doses. If you have a history of liver problems or are taking medicines that affect the liver, such as blood thinners and anti-epileptics, it’s best to steer clear entirely, until you’ve gotten professional medical advice.

CBD has also been linked to an increase in suicidal thoughts and behavior in some studies. While the link needs to be studied further, we’d recommend you speak to your mental health practitioner if you think this applies to you. 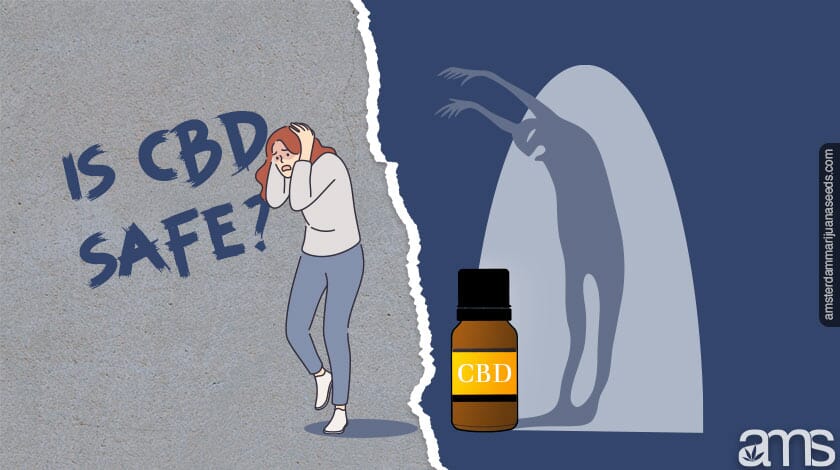 The final word on CBD and relaxation

Of all the cannabinoids, CBD is leading the way for medical and personal healthcare applications. The fact that it is non-intoxicating, generally safe, and already has a proven health benefit for childhood forms of epilepsy, make it a good candidate for further research. More evidence will be available in the coming years.

Overall, some research suggests that CBD does help people get to sleep, or to a place of relaxation, but other studies have shown little or no effect. CBD extracts, supplements, tinctures, and oils are appropriate for this purpose. CBD tampons, toothpicks, and toilet paper, on the other hand? That’s just marketing.

So, if you’re taking CBD to relax, it could be helpful, and for the vast majority of people, it’s safe with few side effects. However, it’s important to mention that none of these therapies are officially recommended yet, and the jury is still out. What this means is that if we decide to self-medicate or use therapies that aren’t yet proven, we could be missing out on the appropriate mental health input that we need.

Lastly, if you do decide to try CBD to help you relax, check the cannabis laws where you live and make sure you’re getting it from a trusted source.

If you’re interested in growing your own high CBD cannabis plants, check out our high CBD seeds.