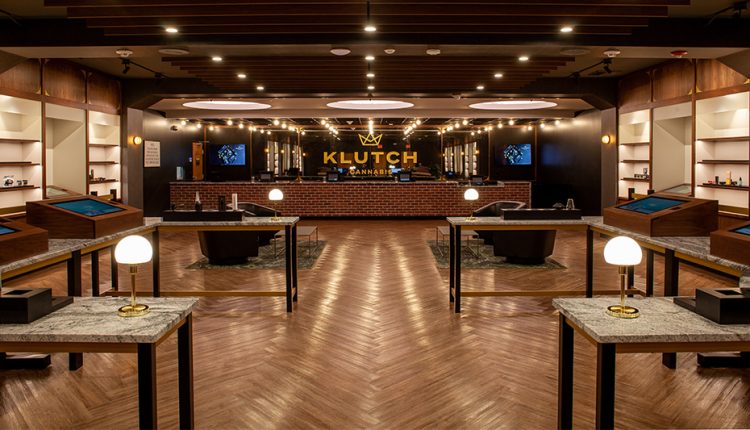 “Open and welcoming and inviting and high end, but still accessible,” is how Pete Nischt, J.D., Klutch Cannabis’ vice president of compliance and communications, describes the intended atmosphere at the Ohio business’ first medical dispensaries, called The Citizen.

to open another The Citizen in Canton around the end of March.

The stores signal Klutch’s diversification in adding retail to its existing cultivation, processing and manufacturing operations. Klutch Founder and CEO Adam Thomarios says the expansion into retail is part of the business’ plan to fully vertically integrate to five dispensaries in Ohio, and expand to other states in the Eastern U.S., such as Florida, where it is currently applying for a license.

In Ohio, as well as other states where Klutch may operate in the future, Thomarios says he would prefer to be vertically integrated because retail is the best way to directly communicate with patients.

Thomarios says Ohio patient experiences will be largely facilitated by Rony Sinharoy, Pharm.D., and Lauren Delande, Pharm.D., both licensed pharmacists who are passionate about medical cannabis and serve as the company’s directors of retail operations.

“Us hiring folks … that actually know the science side behind cannabis probably better than others, and just drugs, in general—I think it’s the way to go to actually educate and teach patients in the retail setting,” Thomarios says.

Another way The Citizen will offer patients education is through interactive kiosks from retail technology company The Peak Beyond. Patients will be able to navigate menus through the kiosk screens; they can also place a product on a kiosk platform, which allows the technology to identify and display information about products, such as prices, cannabinoid contents and descriptions of genetics.

“This was a guaranteed way that patients could actually read approved material that vendors have submitted about their products without it being filtered by a budtender at a counter,” Thomarios says. “It’s a direct way that the state wants patients to learn about certain products and vendors. But also, the piece of it being interactive can drive sales.

The Citizen is also introducing the state of Ohio’s first medical cannabis drive-thru at its Lorain location. For now, patients who choose to use the drive-thru will need to pre-order first to make the pickup process quick and convenient, Thomarios says.

The Canton location likely won’t have a drive-thru when it opens, he adds, but it might become to fruition later in 2023.

Thomarios says the business’ mission is to stand behind the patients it serves, and the company’s expansion into retail represents exactly that.

“[The] majority of the employees at Klutch are patients. They rally around doing good things for people in need.” Thomarios says. “The name TheCitizen—what it means to me is that anybody can pretty much have the ability, if they’ve got a qualifying condition, to try cannabis. And [people] shouldn’t be shunned [when they] do want to try cannabis for their conditions.”

At its home base in Akron, Klutch Cannabis runs an 82,000-square-foot facility that includes 30,000 square feet of indoor cultivation space, a commercial kitchen, a solventless lab, a hydrocarbon lab, a CO2 lab and some other production areas.

Klutch’s products do include chocolates—some are of the Kiva Bars and Terra Bites varieties, as part of a brand deal with Kiva Confections that is exclusive to Ohio—as well as gummies; mints; flower, vapes and concentrates, some of which have genetic profiles from Josh D, a namesake brand of breeder and cultivator Josh Del Russo.

“We’re constantly tweaking things and reevaluating our processes to see if we can improve the quality of the products that we’re making,” Nischt says. “We recently did, for instance, a revamp of our vape lines, focusing on trying to put out the best live resin pods and vapes that we possibly could.”

As Klutch Cannabis expands, Nischt says, the business is careful not to go out over its skis. The goal with retail, as on the production side, is to ensure patients have a positive and accessible experience.

“We want you to know that when you pick up a jar of Klutch flower, we’re going to come in clutch. It’s going to be high quality, some of the best that you can find in the state, and with a very, very high level of consistency. You shouldn’t have any surprises,” Nischt says. “I think that the same can be said for the dispensary. We want you, whoever you are, to feel like a citizen.”

What Cannabis Companies Can Learn From a Craft Merger in Oregon

Visa MasterCard in Your Dispensary for FREE! – Cannabis Hemp Blog