What’s the Best Strain for Sleep? 10 Sleepy Strains to Try 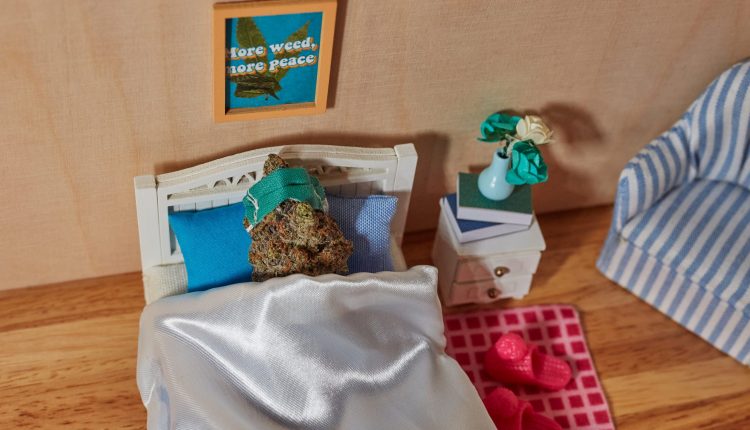 Before we dive into our favorite sleepy strains, a quick caveat: the best strains for sleep will be unique to your body. Chemical profiles will vary from product to product, grower to grower, and even harvest to harvest, which means there’s no guarantee one gram of Northern Lights will be as effective as the next. Finding the right strain for you might take some trial and error, but hey, that’s half of the fun! To set yourself up for success, save the cannabinoid and terpene details for each strain you try and keep note of how they affect you.

Given what we know about how cannabinoids and terpenes contribute to a strain’s effects, we’ve compiled a list of ten strains for sleep, each with various combinations for you to consider. Explore our picks below and keep scrolling for a detailed analysis of what makes a strain potentially sleepy.

Filter strains by effect on the Weedmaps app

One of the most popular indica strains of all time, Northern Lights is loved for its reported ability to relax the body and calm the mind.

Also known as “Granddaddy Purps” or “GDP,” Granddaddy Purple is classically associated with a relaxing body experience. Bred in the early 2000s by crossing Purple Urkle and Big Bud, GDP has stood the test of time and remains a fairly popular strain for winding down.

A cross between Granddaddy Purple and OG Kush, this strain combines the best of the two strains’ many uses to promote a general sense of well-being that can help folks kick back and relax.

Also known as “Dosi” or “Do-si-do,” this strain from Oregon’s Archive Strain Bank is an award winner that displays beautiful orange pistils nestled among green and purple leaves. Many report a potent full-body relaxation that helps them drift right to sleep.

Charlotte’s Web was among the first in a new era of CBD-dominant strains. It was created by Stanley Brothers to help manage seizures for the pediatric medical cannabis patient Charlotte Figi. Today, Charlotte’s Web is one of the most recognized CBD strains that some people use for its deeply calming and soothing effects.

For the Trekkies, Romulan is often included in the strains that were popular in the 1980s called “Blue Indicas” since they contain anthocyanin, a flavonoid that gives the plants their beautiful blue hue. Interestingly, anthocyanin is being studied for its ability to aid in sleep.

Hindu Kush is a pure indica landrace strain, a group of ancient strains that evolved on their own without the intervention of human breeding techniques.

Hailing from the Hindu Kush mountain range in Afghanistan, it’s another strain that’s mostly known and loved for its reportedly calming effects and deep body relaxation.

One of this strain’s parents, OG Kush, is a descendant of Hindu Kush and a well-reputed relaxing strain in its own right. Skywalker OG may offer a nice mood boost that settles into a very mellow and relaxed state.

Blueberry’s popularity has endured over decades and has captured many awards along the way. Its name is linked to its fresh and fruity aroma, along with its beautiful blue hue that may add to its calming effects.

Lilac Diesel may harness the potential sleep benefits of terpinolene without being overly sedative, which makes for a good option for evening sessions. Developed by Ethos Genetics in Colorado, Lilac Diesel offers up purple hues with a fruity and minty aroma.

Cannabis and sleep have a long shared history, and many consumers know that sleepiness is not an uncommon experience when partaking. By personal accounts, indica strains are the first choice when it comes to relaxation and sleep.

So what is it about cannabis — or even a particular strain — that can make someone feel sleepy? Medical research offers mixed results, but it may be helpful to explore two active ingredients in cannabis: cannabinoids and terpenes.

Cannabinoids like tetrahydrocannabinol (THC) and cannabidiol (CBD) are the primary active ingredients in cannabis. While there are over 100 different cannabinoids found in the cannabis plant family, THC and CBD are often the most abundant in any particular strain, as well as the most well-known and studied.

Mixing and dosing THC and CBD for sleep

Mixing CBD and THC has very limited data, but one small human trial in young adults showed that combining CBD and THC before bed reduced the duration of deep sleep. Still, the two also helped mitigate some of the feelings of sleepiness that THC alone produced the next day. One clinical trial among 23 adults in Australia showed that a proprietary blend of THC and CBD was useful in alleviating chronic insomnia.

And when it comes to dosing, one systematic review of the human trials done thus far suggests that lower doses of both CBD and THC may be better for sleep outcomes, but more research is needed before coming to any conclusions. This same review found that the existing data best supports the use of cannabis for sleep in patients with pain-related conditions, as opposed to those living with mental health symptoms or sleep disorders.

Terpenes are the flavor and aroma compounds found in cannabis and everywhere in nature, from the floral scent of lilac to the spicy notes you pick up in basil.

They have benefits of their own, and research is underway to discover more about the potential therapeutic uses for these compounds. Most of the evidence we have now comes from animal research, but increasing evidence points to several terpenes as having the potential to help us relax and get better sleep.

While terpenes may offer us sleep benefits on their own, research scientists are also interested in the potential synergies between cannabinoids, terpenes, and other active compounds in cannabis, which is often referred to as the “entourage effect,” which may explain why different strains impact us in different ways.

Terpinolene, limonene, and pinene, for instance, are terpenes often found in strains that are known to be uplifting and energizing, but as initial research suggests, they may also offer relaxation and sleep benefits. The particular combinations of terpenes — and their relative concentrations — may produce varying effects. Exploring a variety of cannabinoid and terpene profiles may be your best bet to find a strain that is helpful for your slumber.

Are indicas better for sleep?

The indica versus sativa debate is often grounded in effects: sativas are thought to be energizing and uplifting, while indicas are considered chill and relaxing. When visiting a dispensary, “indica” and “sativa” are what most budtenders will use to help guide strain choices.

The terms refer to the subspecies of the cannabis plant family. Sativas are tall, slender, and found in hotter climates, and indicas are short and bushy and hail from colder climates with shorter growing seasons. These subspecies come from centuries of taxonomic discussion among botanists, and these taxonomic classifications alone are not enough to tell you how a particular strain will make you feel.

And with modern breeding techniques and the abundance of hybrid strains, it’s less about indica versus sativa and more about the unique chemical profile of a strain — or its “chemovar.” Every person’s experience with a chemovar will be slightly different based on their body.

That said, checking out a few indicas may be a good place to start when looking for a sleepy strain, but keep an open mind and remember that effects will not be dictated by indica or sativa classifications alone.

Editor’s note: Weedmaps does not get affiliate revenue from the strains recommended in this article. All sleepy strains were chosen independently. The only influence Weedmaps News is under is weed.

What’s the Best Strain for Sleep? 10 Sleepy Strains to Try

The 8 Best Edibles for Sleep: Our Top Picks